Kate Greenaway (1846-1901) is famed for her illustrations of children in ‘old fashioned’ clothing, the girls often in neo-classical dress styles.  A talented artist, she was also on the fringes of the dress reform movement, which was influential for the upper and middle-classes as the aesthetic dress movement during the 1870s and 1880s.  The looseness of the smock frock’s form and the elasticity of the smocking allowed freedom of movement. Its simplicity and the Arts and Crafts feel of the embroidery, traditional and hand-crafted with care, was more appealing than over-elaboration and machine-made embellishment, fitting well with the movement’s ideals.

Greenaway’s drawings from the 1870s and 1880s adapted a style of dress that she had seen as a child growing up in Rolleston, Nottinghamshire, close to Newark, a centre for readymade smock frock manufacture.  Greenaway is often credited with introducing this style of clothing for children.  Her first book, Under the Window, published in 1879, featured boys in various coloured smock frocks.  A newspaper commented in 1880 that dozens of elaborately stitched and gathered smocks could be seen hanging in ready-made clothes shops if women wanted to study the newest fashion for children. The rusticating of children’s fashion was also noted in 1881, said to have been influenced by the illustrations of Kate Greenaway. Little smock-frocks were ‘all the rage’ with bright stitchery on the ‘old milkman’s elaborate yoke’.  For Greenaway, as in rural areas, boys wore smocks and she was criticised by Lady Harberton of the Rational Dress Society for children’s clothes that were ‘unsuited to the practical needs and comforts of boys’ and girls’. 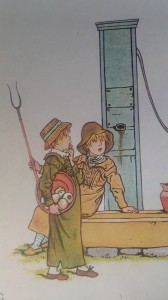 Greenaway may have popularised the style initially for boys, the smock fitting well into the trend for elements of play and fantasy in boys’ clothing of the period, for example sailor suits and kilts. However, unisex smocks followed the aesthetic for children’s clothing during the 1880s, influenced by the dress reform movements.  The style spread into everyday children’s wear, with variants of different qualities for different occasions, for example silk for best or occasional wear, becoming a ‘common’ fashion item, a situation that remains today.  Widely adopted and mass-manufactured, a constant demand kept prices low for consumers of all classes.  This adoption of a working garment, as with also the sailor suit although this had more militaristic connotations, became associated with middle-class dressing practices, although it was widely adopted across all classes.  By the late 1880s, ‘Liberty’ smock frocks for children were being sold throughout the country, for instance at Corder and Sons, high-class dressmakers in Sunderland, presumably made-up with Liberty fabric.

The Liberty Mab Smock, a revival of the traditional garment, supposedly based on Greenaway’s designs, remained popular and a stock garment for children of both sexes into the twentieth century. Lady Elizabeth Bowes-Lyon, the future Queen Mother, was photographed wearing one in 1907 and Clara Frances Lloyd, who worked for Liberty, recalled making them into the 1920s. Lloyd, who worked in the embroidery rooms at Liberty, recalled that they ‘did more smocking than embroidery…[it] was a speciality of the house’, the popularity of the style aided by Princess Mary, who dressed her boys in smocks, thus giving them royal kudos.  Prince George and Princess Charlotte continue to wear clothing based on this smock today, now seen as classic garment. 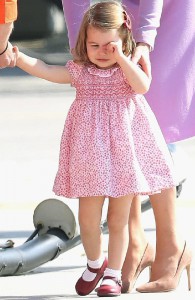