The ‘biographies’ of garments is an expanding research area, as the personal and physical relationship that we have with our clothes is investigated by academics.  How people care for their clothing, both today and in the past, can perhaps give us a small insight into how they regard their own garments.  In this era of fast fashion, where clothing is a cheap commodity that can be readily changed and thrown away, it is easy to forget how expensive and valuable clothing was, even the most common garments costing at least a week’s wages.  Smocks, like other working garments, were easily stolen, often by other working men, and sold and exchanged for cash because of this inherent value.  For this reason alone, their monetary value, their maintenance was a routine task.

However, the pride shown in clothing by working people during the nineteenth century is also visible in the smock by the very fact that it is often embellished, for example with embroidery, suggesting that their appearance and decorativeness was important to their wearer.  They could be cherished enough to passed on generation to generation.  Of course, there is some differentiation between those worn for best and for rituals such as weddings and funerals, and workaday ones, which were likely to be plainer and worn until they fell apart into rags, which could then be sold and recycled.

Looking at surviving smocks though, you can see the care taken to repair damage, to maintain the garment and keep it wearable.  The wear patterns of clothing, as a memory of the wearer, is both old fashioned object analysis and a fashionable topic itself, with the current FIT exhibition in New York, ‘Fashion Unraveled’, with its focus on altered, unfinished and deconstructed garments.  The imperfections and flaws of a garment are highlighted to emphasize the emotional as well as the economic impact of clothing for its wearer. Visible mending, as a way to enhance a garment and stop it from becoming obsolete and thrown away, has also had a new surge of interest.  Led by artists such as Celia Pym, the old skills of darning and mending, which all girls once learnt, are being re-learnt by people today. 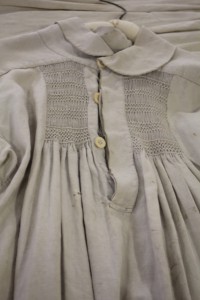 The smock was made to be durable and guard against wear, one of the purposes of smocking in the first place, but in surviving smock frocks, wear patterns are often similar: fraying around the cuffs, holes in the skirt and the smocking rubbed and starting to become undone. A smock I recently examined in the Somerset Heritage Centre (see above) had the most beautiful visible mending with a series of holes all edged with blanket stitch.  Other areas were also patched and darned, suggesting the desire to maintain and preserve the use of the garment as best as possible (see below).  Even ordinary working clothing was required to last extensive periods of time, with its relatively expensive cost, so mending clothing was part of the everyday schedule.  It is a skill which has been forgotten but as debates around the effects of fast fashion grow, one that many are rediscovering. 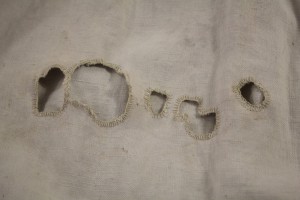 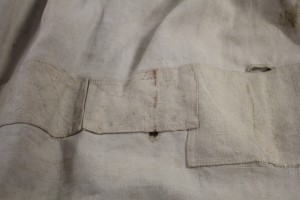