The cricket season is well and truly on us again and it seems that a century or so ago, the smock frock played its part in the game, although not as a stand in for cricketing whites, even if it might have been suitable, if a little voluminous.

In July 1895, the Dorking and Leatherhead Advertiser reported the death of Isaac Baxter, aged 77, who was the blacksmith for the villages of Beare Greene and Capel Street, working his trade for over fifty years in a smock frock.  He was a renowned cricketer, living opposite the ground, and known for:

The vigour of his batting, as became the wielder of a sledgehammer, and as one of the swiftest over-hand bowlers in the South of England. Demur was frequently made as to whether his was fair bowling, or was throwing.  Eventually the question was submitted to some Surrey County players, who decided that it was fair bowling.  Once it was said his ball knocked a bail a distance of forty yards.

He would have seemed a formidable opponent with his upper body strength!

In 1890, a single wicket match was played in Cranbrook, Sussex, in the dress of ‘ye olden times’, the cricketers wearing ‘box’ hats.  I am not sure what they are, but the umpires had tall white hats and white smock frocks.  The smock frock was the right colour and added a certain gravitas to those charged with keeping order.

The inhabitants of Cranbrook certainly liked their sport.  A year later, Cranbrook Athletic Sports contest was revived after a ten year gap.  Half day holidays were granted by businesses to allow attendance with cheap fares on the railway to Staplehurst too.  Most of the events seem fairly similar to modern athletics competitions including running races, long jump, high jump and a mile bicycle race.  The one which drew my attention, however, was the ‘300 Yards Walking and Smoking Race, the competitors smoking veritable “Churchwarden” clays [pipes], and wearing smock frocks with high hats…Time 1 min. 41secs.’  Dressed similarly to the cricket umpires, I think that that competition might possibly just be frowned upon today and certainly in the context of athletics!

Cricket and smock frocks were also used to entice inhabitants of Chapel Row in Berkshire, to come to the local fair in August 1830.  Cattle were to be bought and sold and men hired for harvest work, but there was also prize money for a cricket match, with hats and smock frocks for good bowling, which might have been appealing to local labourers.

Order was to be kept at the fair with no fighting of any sort allowed though other amusements were provided.  Jingling was apparently a game where players were blindfolded and had to try and catch another who wasn’t but carrying a bell, hence jingling.  And I would love to try a treacled cake.  I haven’t been able to ascertain exactly what these were, but as treacle was a by-product of sugar refinery and this was before golden syrup was invented, I imagine that they were cheap sweet treats for the locals, who would have had very little other sugar in their diets. 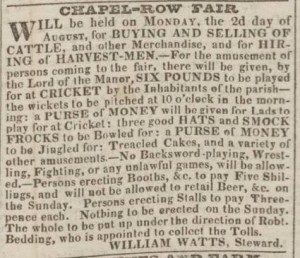 The Chapel Row Fair is local to me and sadly not on this year.  Maybe next year it will be back – perhaps a revival of jingling and treacled cakes might help!