As the Covid 19 Pandemic continues across the world, a PPE (Personal Protective Equipment) crisis has developed as frontline workers try to deal with protecting both themselves and others, and prevent further spreading the virus, by using protective clothing.  Plague masks are well-known as historical protective wear but during the nineteenth century the smock frock was also used as a protective overall against disease.

In Lincolnshire, in 1866, the smock frock was suggested as the best dress to wear when cattle plague struck.  In a meeting called to discuss the crisis, basic hygiene rules were discussed, for example, that there should be people solely to attend to the infected cattle, the smock frock suitable for protective garb as cotton would not carry the infection like wool articles would.[1]  It presumably could also be washed.   However, in Warwickshire, in 1865, Rinderpest or Cattle Plague was seen by one letter writer as being spread by smock frocks.  In cavalry regiments, he argued, when horses were ill, they were immediately isolated and the stables cleaned.  He urged ‘caution and cleanliness’, so suggested destroying smock frocks worn by those tending diseased cattle, as the ‘contagion’ would also be carried in the clothing; ‘for the smell of the smock-frock may infect the whole dairy of cows’.[2]  This was a virus, which has now been eradicated, but could be transmitted by particles in the air, so although not the smell, he was close to the way the virus was transferred.  Contemporary virulent diseases such as typhus were in fact transferred through clothing.

Likewise in 1884, there was an outbreak of foot and mouth disease in Northumberland.  Those who came into contact with infected animals were advised to change their clothing and wear a canvas or cotton cap, smock frock, a pair of overalls and a pair of boots or shoes, so their ordinary clothing was not exposed.[3]  Here, the term overalls, seems to refer to trouser coverings, as jeans were referred to in the US, originally worn over other trousers.   Both the smock and overalls could be obtained from local inspectors for loan free of charge, in an attempt to control the disease with these regulations.

Today, once more, the importance of protective clothing, and the need to maintain and change that clothing, is again emphasized, as we fight a new virus with many of the same techniques – isolation, washing and personal protection through clothing.  The smock was the precursor to many of these protective gowns and lab coats.  Ironically, companies such as Burberry, who initially expanded through the manufacturing of smocks, have helped realise some of the growing demand for PPE by changing their current output to again make protective clothing for the NHS.[4]

[3] Morpeth Herald, 20 September 1884. This was also the case in Gloucestershire, where a smock frock was to be kept entirely for use of the person attending the cattle and left on the premises, see Western Gazette, 28 September 1883 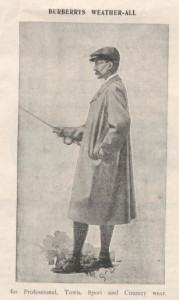