For those with messy jobs, an overall has always been necessary, to prevent other clothes from getting dirty.  The smock frock was one such overall.  However, the artist’s smock has almost become legendary in its own right, with its Bohemian vibe and association with artists’ enclaves such as St. Ives, although here also mixed with the maritime smock.  Whilst these garments have often been plain and voluminous, an oversized shirt if you will, as we used to use our Dad’s cast-off shirts as a cover-up for art at primary school in the 1970s, the smock frock was also used for this purpose by artists.

As they became increasingly mass-produced in the second-half of the nineteenth century and therefore cheap, artists could acquire them easily and inexpensively.  In 1893, George Frederick Watts, displayed a portrait of a youth in a ‘smock-frock’, according to the Graphic. Art historians have seen this as an earlier self-portrait of the artist as a younger man.  In the later years of his life, he was described as busying himself with artistic pursuits at his home Limnerslease, near Guildford, wearing white trousers and a white smock.  Part of his house is now the Watts Studios museum.  Mary Watts, his second wife, was also photographed wearing an embroidered smock frock while plastering ceiling panels for Limnerslease in 1890-3.

The sculptor, Hamo Thornycroft, was another well-known artist wearer of the smock frock.  As the Pall Mall Gazette reported in 1890, ‘He invariably dons a white smock frock of the pattern associated with village rustics, and his clay be-daubed hands complete the resemblance’. Vanity Fair published a drawing of him as part of its ‘Spy’ series, wearing such an outfit. It was dated February 20th 1892 and entitled ‘Bronze Statuary’, in the ‘Men of the Day’ series. 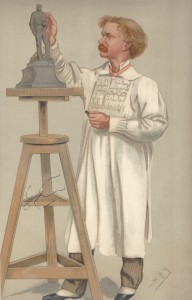 So whilst every artist would wear some kind of overall, by the late nineteenth century the smocking on the smock frock, whether handmade or mass produced, also appealed on another level to many artists interested in dress reform and less restrictive clothing. Watts and Thornycroft were members of the Healthy and Artistic Dress Union, Thornycroft designing a partially smocked and less restrictive Liberty silk dress for his wife, dating from around 1885, now in the V & A Museum. 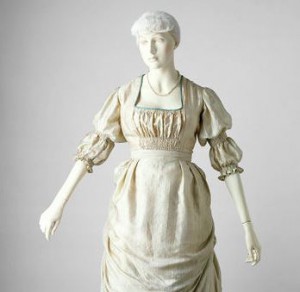 The hand-crafted feel with embroidered embellishment similarly appealed to those working in the Arts and Crafts movement, such as Arthur Stone (1847-1938), a silversmith born in England but who worked in the USA.  His smock was hand embroidered with a dragon holding a chisel. 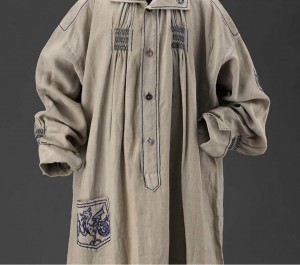 By the early twentieth century, the smock had become fashionable informal wear for women, a protective overall for gardening, housework and artistic pursuits.  The move to become an acceptable female garment rather than something worn by male labourers was due to its artistic and dress reform associations.

For further on this subject see: ‘The Smock Frock: The Journey from Fieldwork to the Pages of Vogue’, Textile History, online or May 2018.