Carters were essential to nineteenth century life, being the people who helped transport goods and produce around the country.  This could be on a fairly local scale, acting as local carriers, but they were also employed to move goods around by horse-drawn carts at dock yards and similar working environments, as well as transport quantities of produce around farms, a role the tractor would eventually take over. 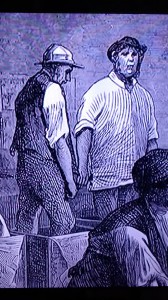 They likewise could fulfil long-distance movement of goods, as haulage companies would today.  They were one of the occupations that became associated with wearing the smock frock in both rural and urban settings, carters and waggoners seen at hiring fairs, according to Thomas Hardy, in their smocks with a piece of whipcord twisted around their hats looking for work.  In the 1880s, looking back at earlier in the century, a gentleman remembered a driver in a smock frock waiting with his horses and waggons in Piccadilly, otherwise known as the start of ‘the road to Reading’, or the A4 today.  As the report remarked in 1884, ‘Few people nowadays ever think of that biscuit-making town as they saunter idly along Piccadilly’.

So strongly did the smock and the carter become connected that in processions and more formal occasions it was the dress that they chose to wear.  In 1846, for the Milborne Port Friendly Society procession, carters wore their smock frocks and straw hats decorated with red and green ribbons as they were in charge of a waggon parading the new church bells through the local streets.  Indeed, ‘Waggoner’s Frocks’ or ‘Carter’s Smock’ was a generalised name given to the garment in the eighteenth and early nineteenth centuries, for example, the Workwoman’s Guide of 1838, which included instructions about how to make one.  These jobs and the people who did them, were probably one of the most visible wearers of smocks to observers in urban areas. A waggoner’s smock survives in Lincolnshire, owned by G. Codling, a waggoner of Nettleham, Lincolnshire.  On each button is a picture of a wagon and the name ‘G. Codling’, so this may have been a way of promoting the business as much as any practical dress by the mid nineteenth century.

Over the course of the nineteenth century, the role of the carter diminished as horse power became mechanised and like the smock frock itself, was superseded by new jobs.  Along with shepherds, it, however, remained one of the occupations most associated with wearing the smock frock.