In the eighteenth and early nineteenth centuries, the rural audience was important for provincial theatre companies.  Indeed, Roger Kemble, the father of Sarah Siddons, the famous actress at around the turn of the nineteenth century, managed a company of strolling players. They toured the countryside and Roger was said to ‘have gone forth to proclaim the play at the doors of different farmers, accoutred in a smock frock and a grenadiers’ cap, and has been delighted to regale himself with a pint of ale at a hedge-side inn…’

This affinity with the countryside seems to have changed by the 1880s, when the comic character of the rustic seems to have been well-established in popular Victorian theatre.  As we saw with Lily Langtry, the act of wearing a smock frock could immediately suggest certain things about a character to the audience.  For example, simple, uncouth behaviour, being unsophisticated and probably uneducated, a typical country ‘bumpkin’, a term in usage during the nineteenth century and of sixteenth century origin, though the similar term ‘yokel’ was nineteenth century in origin.

This was helpfully summed up in an article entitled ‘The Stage Rustic’ from 1891:

There is the indispensable smock frock as well as the indispensable gaiters upon the melodramatic stage.  The old dodderer has them, and so has the young; so has the benevolent squire; so has his rascally son; so has the supposedly well-to-do (but about to be bankrupt) farmer; so has the gamekeeper, very honest, or very much the reverse, without whom no good rustic play can be concocted.

So along with the smock, the gaiters, which were protective coverings for the lower legs as seen in the photograph below, formed a coherent visual picture for rustic characters. 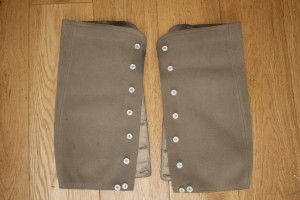 As the article comments:

The wardrobe of rural drama is, it will be seen, very simple.  It has not many varieties, and it is delightfully cheap, for the same articles can be made to spread over a large period of years, which is good for the actors.  No parts are as easily dressed as those of the rustic school.

Characters were moving outside the vagaries of fashion and wearing similar costumes.  Although the article is slightly tongue in cheek, perhaps fitting with the comedy or farce that could be generated from yokels in smock frocks and gaiters, the simple character of the rustic had become stock for playwrights and for those in variety and music hall.  Its popularity now appeared to chime with audience across the country despite the often mocking caricature.

Roger Turnip was one such parody.  In 1879, a case of theft was reported in a Hastings newspaper, when the portmanteau of Mr J. D. Hunter, a comedian, was stolen.  The report lists the costume that he lost and includes garments for his rustic character ‘Roger Turnip’.  His costume was three pairs of trousers, a velveteen coat, smock frock and leather gaiters, so fitting with the report above.  Hunter had been performing at Margate and left the articles in his dressing room when they were stolen.  They were later found and a man sentenced for their theft.  Hunter himself, remained a comedian, associated in particular with the Pier Pavilion, on the pier at Hastings, where he was the manager as well as a performer, by the 1880s.  He played alongside such acts as the immensely popular comedian Arthur Lloyd and his wife Katty King when they visited the theatre, for example, ‘The Rival Lovers’ in 1888.  The character of the rustic in his repertoire had served him well.