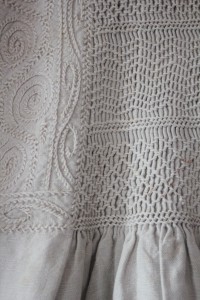 Smock frocks do turn up in the most unusual places and on the most unusual people.  Lily Langtry for example, famous for being an actress and mistress of the future Edward VII.  It is amazing where they can lead you, here into the world of Victorian drama, although I have to declare an interest having a great uncle on stage around the same time as Lily although I don’t know whether he wore a smock frock or indeed knew Lily.

Lily was born in Jersey in 1853. She married Irish landowner Edward Langtry in 1874, shortly after coming to London where she captivated high society and sat for various artists including Millais, partly because her simple plain black dress marked her out as different.  The rest of the 1870s and early 1880s were tumultuous, including her affair with the Prince of Wales, the birth of her daughter and her husband’s bankruptcy.

On the advice of her friend Oscar Wilde, to support herself, she took up acting, making her professional debut in December 1881 at the Haymarket in London in ‘She Stoops to Conquer’.  She was popular with the public forming her own touring company in 1882 which covered the country.  American impresario, Henry Abbey, organised a tour of the United States which she completed in 1882-3 to wide public success if not critical acclaim.  In 1883, she registered for six weeks intensive training at the Paris Conservatoire to improve her acting technique.

She then returned to touring the provinces, as the Bucks Herald reports, ‘Mrs Langtry is everywhere attracting enthusiastic houses in her provincial tour’.  Her new play was widely reported, partly because it required the renowned beauty to dress in boy’s clothing. As the Spirit of the Times in New York reported on 20 June 1885:

Two new plays of Interest have been recently produced in London, but the cable has failed to give us any account of their reception. One is A Young Tramp, written by W. G. Wills, for Mrs. Langtry, in which, for the first time since her Rosalind, the British beauty appears in boy’s clothes.

It certainly aroused worldwide curiosity, even if communications could not provide all the desired information.  The play was noted in Daily Alta California, Volume 38, 7 June 1885 and in the New Zealand Herald, Volume XXII, I25 July 1885, where it was described as ‘A light vein of high comedy mingles with the romantic pathos of the drama’.  W. G. Wills was a well-known Irish play writer of the period who produced over thirty plays and worked regularly with Henry Irving.  He wrote this play in 1884, its full title ‘A little tramp: or, Landlords & tenants. A comedy drama in prologue and three acts’, although it was also called ‘A Young Tramp’ too.

The smock frock reference came with its performance at the Prince’s Theatre in Bristol on 12 September 1885 where Lily ‘looked very charming disguised as a boy’. [W.G. Wills: Dramatist and Painter, Freeman Wills, 1898).  As the Bucks Herald noted on 19 September 1885, ‘Her appearance in boy’s clothes…excited great enthusiasm; but her assumption of the loose smock-frock and easy fitting breeches of the Yorkshire yokel was hardly what was anticipated’. I am not sure if the writer disapproved of the assumption of male dress and perhaps the disguise of her famous beauty or whether it is the smock frock in particular, a working garment solely for men with a disreputable reputation especially at that time, before it reached the folk status we associate with it today.  The writer does conclude that her ‘acting…improves every month’ so at least he was grateful for that.

Probably everyone is by this time pretty tired of hearing that Mrs Langtry is or is not to   appear in breeches in Mr Wills’ play ‘A Little Tramp,’ but independently of Mrs Langtry there is a peculiarity about one particular scene. The little tramp disappears — his supposed corpse is found in a river, and he attends his own funeral. This story, according to the New York Herald, is founded upon an actual adventure which occurred to Miss Ellen Terry, who   once disappeared for a few days without letting her friends know where she had gone. The body of a woman who resembled her was found in the Thames and was being duly buried in   her name, when to the astonishment of all she burst in upon the scene as gay and bright and full of life as ever.

The play was obviously gaining some notoriety, both for the cross dressing and the relationship to the disappearance of Ellen Terry.

The play continued to be produced, in 1889 in a tour around America although I cannot find any further references to costume nor, sadly, any photographs so I am not sure if the smock frock went too.   The Rock Island Argus, Number 7, 26 October 1889, eulogised:

The play was a grand success, the critics of the great metropolis praised it with one accord, the superior quality of its material, its faultless construction, its dramatic force, the     originality of the plot and purity of language in which the story is told. ‘A Little Tramp’ has enjoyed a highly successful career throughout England. The nature of the plot is such, and it is unfolded so delicately, so gracefully, that to publish the entire story would be to rob the   audience of many pleasant surprises. …’A Little Tramp’ has the elements to satisfy the most genuine patrons of dramatic art.

A popular dramatic realisation of the true lives of the tramps such as those that we saw in the previous blog, sanitized just enough for the Victorian theatre-going audience.