As the smock frock was so widely worn by working men, it could be a useful disguise for swindlers and criminals.  The game of thimblerig was one such scheme used by gangs who roamed the country to try and gain money, especially in the early 1830s.  1834 seems to have been a particularly bad year for this.  The game was, and is, well-known, the thimblerigger using sleight of hand to move balls or pellets or peas about under three cups or thimbles and asking the spectator to bet on where the final location was.

Around Wolverhampton, a gang of nine men were using nut shells instead of thimbles, the ‘sharpers’ [or swindlers] always winning.  Each played a part and dressed in appropriate clothing to draw people in to participate.  The ‘actors’ wearing smocks tried their luck and, having won, drew in the real customers, who, of course, lost.  A similar gang  were ensnaring people on the remote fell road between Durham and Gateshead, the gang variously dressed as a pedlar, a fashionable man, a sailor and a carter in a smock frock.  Engaging people they thought might be trapped in conversation, and telling tales about how they had just lost, or just won, at thimblerig, they would lead the unwary to the game where they were inveigled to join in.  There were tales of people losing all they had in just a few minutes.  One tea hawker, a man who travelled around remote areas selling tea door to door, often to people who did not have other access to such provisions, lost twelve sovereigns [a gold coin with a value of one pound] in six minutes, the proceeds of his sales which he was taking back to his employer in Newcastle.

Race courses were another forum for this trickery, a report about a very similar gang working the crowd at Chelmsford Races in July 1833 with a stock of characters from ‘a Bond Street exquisite’ to a labourer in a smock frock, acting as procurers and decoys, resulting in hundreds of people being ‘plundered’ of their cash.  It was obviously a situation which continued, William Frith depicting the fraud in his monumental painting of Derby Day, 1856-8, in the Tate Gallery. 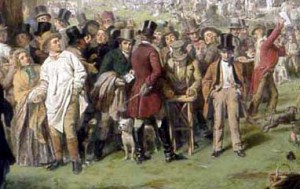 The newspaper reports connected the gangs with other criminal behaviour from pick pocketing to living with prostitutes, but it was a ruse that clearly continued to be worthwhile, the smock frock playing its part in the deception, helping to define people by their dress, in this case wrongly!