The annual Michaelmas Fair has just finished in our nearest town and although it is now all dodgems, haunted houses, terrifying rides to take you up into the air and drop you, flashing lights and loud music, such fairs follow a long tradition and were an important part of, and release from, the working calendar for labourers.

A report about a fair in May 1857 in Boston, Lincolnshire, was printed in the Stamford Mercury.  Held over several days, there were prizes for farm animals, cattle, sheep and pigs, which were also bought and sold.  Alongside the serious business was the pleasure fair, Wombwells, well-known for their travelling menagerie, presenting an exhibition of exotic animals and Chipperfields offering a circus.  A pig weighing 105 stone was displayed, which was nine feet long and insured for 150 pounds.  Other attractions were listed: ‘performing monkeys and dogs, knowing ponies, ‘industrious fleas’, twin calves, giants in smock frocks to make them look bigger, microscopic and stereoscopic exhibitors…a host of photographers’, which, of course, was still relatively novel.  Music and theatre were also an important part as was the slight edge – pick pocketing was rife and ‘suspicious characters’ ever present. 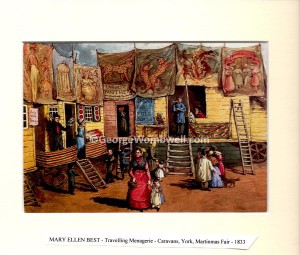 Many of the patrons of the fair would have worn smock frocks, as seen also at York Fair above, Lincolnshire a county which contained several smock frock manufacturers and known as a place where they were frequently worn.  At the fair, they were used as a disguise to help the ‘giants’, their capaciousness no doubt helping to disguise some trickery.  They were probably used by the criminal fraternity too, both to help mingle inconspicuously in the crowd in order to pick pockets, as well as being useful for hiding any stolen property in their large pockets or just underneath.  Poachers, for example, in the same period used them to hide hares, birds and other animals from detection. Deception and disguise fully in action.