How the smock frock was depicted by artists has, to some extent, been dependent on the contemporary political situation. During the Napoleonic Wars, and especially during the blockade, at its strongest between 1807 and 1809, agriculture, and the production of food to feed the nation, were inherently patriotic with model labourers depicted in smock frocks.  During the difficult period of the 1840s, with the rise of Chartism and labour movements and the ever-present threat of rural starvation, few agricultural paintings were exhibited, seemingly out of place. Instead, genre scenes with the domestic affectations of the labourer, the myth of the virtuous peasant, contented, pious and devoted to farm life, were welcomed into middle-class homes as a balm against threats of revolution and Chartism.  From the late 1840s and 1850s, an awareness of rural poverty and distress began to permeate artists’ depictions, the Pre-Raphaelites, founded in 1848, striving for naturalism, rejecting the earlier approach of the virtuous peasant’s happiness.

In 1857, Henry Wallis, who was connected to the Pre-Raphaelites, painted ‘Dead Stonebreaker’.  For Wallis, this reflected the consequences of the unfavourable external conditions of society, contrasting with his most famous painting, the ‘Death of Chatterton’, which focussed on the personal internal struggles of one man and his supposed suicide.  The ‘Dead Stonebreaker’ depicts, as a review put it, ‘A man in a smock frock…dead upon a stone heap’.  The contemporary reviewer was sceptical about the subject, suggesting that if the painting wasn’t so titled, the viewer would just think the man asleep: ‘There are no indications of unusual poverty or disease about him, to warrant such an end; for his smockfrock is in very good condition for a stone breaker’s; and judging from his face, we should pronounce him to be both healthy and well fed.’ However, a review in the London Daily News was more compassionate: ‘Poor wretch, all his path in life has been beset with thorns! But he is at rest at last; no one waits for or will seek him; no one will miss him. His … face and low brow, tell of stolid ignorance and abject misery. He has never been a poacher or housebreaker; or come to London to be refined into a swindler and pickpocket….He is very dead.’  Although this subject struck a chord, the dark hues of the painting did not find favour with this critic.

The painting showed man’s oneness with nature, the stone breaker expiring with the day, a stoat on his foot.  The rural setting focussed the attention of the viewer on what were perceived to be rural problems:  the inhumanity of stone breaking, often work given to the able-bodied poor in a workhouse, and so the implicit criticism of rural poor relief, although also reflecting an universal concern for the poor.  The geographically remote setting provided a detached scene for universal issues to be played out with the indirect criticism of industrialisation.  His dress, including the short smock, is workwear, suggesting hard manual labour rather than a rural idyll which, despite the backdrop, it is not.

Such socially conscious art continued to develop, showing the down trodden reality of many labourers’ lives and became increasingly popular, collected by middle-class merchants, industrialists and professionals. Influenced by French artists such as Jules Breton, this movement reached its peak in the 1880s with the paintings of George Clausen, who using photography, drew labourers from life, although by this point, the smock frock was infrequently worn by them. 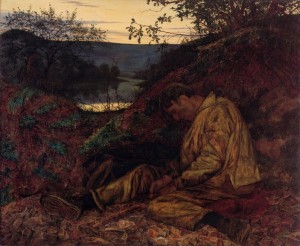