Easter was traditionally the time to wear new clothes, with its associations with rebirth and renewal.  It was also the end of Lent and thus cause for a celebration, the lean months of the year over.  By the fifteenth century, it was seen as bad luck if you didn’t wear new clothes at Easter.  If you managed to do this, with the economic outlay that this implied, good luck would follow for the rest of the year.  In a newspaper report in the Derbyshire Times and Chesterfield Herald in April 1862, it was described as ‘a positive dereliction of duty if Hodge does not appear in a new velveteen coat or smock frock covered with fancy stitching’, for the Easter holiday.  It was an important celebration, the working men having ‘few “red letter” days compared with those on the Continent’.  The ‘red letter’ came from the idea of marking important holy festivals in red on the church calendar, a practice carried out since at least the fifteenth century.  Public holidays such as Easter and Christmas were a rare guaranteed break for workers, Bank Holidays not introduced until 1871.  The lack of religious festivals in England compared to other countries on the continent, also meant less time off, with the UK still today having the lowest number of public holidays in Europe, resulting in a Labour pledge in the upcoming general election for four more.

As always, the newspaper report, describing the new smock frocks and gowns with ‘very lively coloured’ ribbons, also focused on that Easter perennial, the weather.  Hoping for better weather than last year and for ‘skyey influences’ not to disrupt the gathering, a successful Easter celebration and enjoyment by all was hoped for. 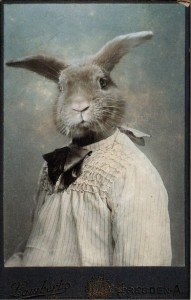