As I have noted in my previous blog about milkmen [http://www.smockfrock.co.uk/the-white-of-the-milkman/], the white smock frock was a useful overall for those involved in food production and food selling, being washable and durable as well as suggesting cleanliness and hygiene.  It frequently turns up in sources dealing with the fish trade.  Of course, the maritime smock, worn by sailors and fishermen, which was plainer and shorter than the traditional smock frock, may have influenced this. [see illustration below, James Clarke Hook, Crabbers, 1876]  However, those involved in the fish trade seemed to favour a hybrid garment, somewhere in between the two versions.

Joshua Cristall depicted the Fish Market on Hastings Beach in 1808, with long white plain smocks visible on several men at a time when smocks in general were not so embellished.  [see illustration below, V&A collection]  Indeed, when Joseph Foster died in 1909 in Hastings, it was noted that he had worn a white smock frock at his stall in the Fish Market in the Old Town,[1] so this was seemingly a tradition for some fish sellers there during the nineteenth century. 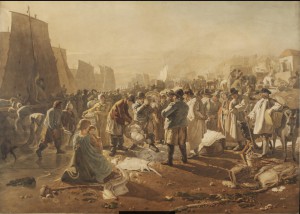 They also seem to have been worn by those in the London fish trade.  In a description of Billingsgate Fish Market in 1872, those who carried the fish from the transport to the auctioneers were described as clad in corduroy and smock frocks with sou’westers and wooden clogs, finishing off their practical outfits.[2]   A fish salesman, Edward Soloman, wore a dirty smock frock when he entered the breakfast room of the Three Tuns Hotel in Billingsgate, contrary to hotel regulations, and was turned out by the landlord.[3]  In 1881, a man put a white one on to sell fish in Billingsgate Market,[4] so white smocks seem to have been not uncommon.

Butchers too had a long association with the smock, the blue one in particular linked to the trade.  As smock manufactures diversified and specialised, particular smocks were made for the butchery trade which would have been less embellished than a traditional smock frock.  Edwin Butler sold ready-made clothes in Birmingham High Street, his stock in the mid-nineteenth century including butchers blue smocks.  In a dispute and alleged assault between a butcher and a Jewish salesman in Gloucester, the butcher was described as wearing ‘a dirty smock frock’.[5]  Even today, traditional butchers wear a white or blue and white striped coat as an overall, which seemingly has a lineage back to the smock.  Butcher’s blue has also become a particular type of colour still used for aprons and textiles associated with kitchen usage.  The smock continues to influence workwear even today.

[1] Hastings and St Leonards Observer, 16 October 1909, p. 9, where he was noted as a strong liberal and ‘ardent teetotaler’, a member of the friendly temperance society ‘Sons of the Phoenix’.

[5] Gloucestershire Chronicle, 10 January 1846.  They were still wearing them at the end of the century, see a slander case between a butcher and a meat salesman in London, Illustrated Police News , 26 March 1898.