Obtaining fresh milk was somewhat problematic for Londoners in the eighteenth and nineteenth centuries.   The association with rusticity and the countryside was always there however, with milkmaids depicted in the illustrated Cries of London, for which there was a vogue around the turn of the nineteenth century.  They were the most beautiful and healthy criers, full of the joys of country air, with a bloom in their cheeks, especially when compared to the insipid pallor of those living in the city.  This famous image of one such milk maid was published as an engraving in 1793, drawn by Francis Wheatley. 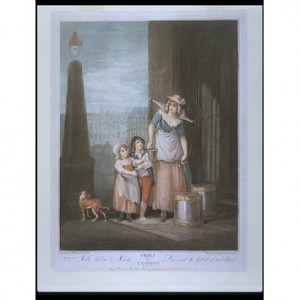 It is probably something about the purity of the white of milk and the bleached whiteness of the smock frock that the garment came to be associated with milk men during the nineteenth century.  And purity wasn’t something that milk consumers could always rely on.  As detailed by a newspaper in 1856 under the witty title, ‘A New Milky Way’, consumers were informed that a new company had been set up to supply London with ‘pure’ milk, citing that they had begun to look upon the promise of pure milk as ‘pure humbug’.  With various food adulterating scandals current at this time, the newspaper welcomed milk that hadn’t been mixed with chalk and that didn’t leave a chalky sediment in a jug.  Their complaint was that they had previously been taken in by milkmen in smock frocks purporting to come directly from the country and evoking rural simplicity whilst selling an adulterated product.

Adulteration of milk was a common problem with up to a quarter of the supply found to be watered down or added to with chalk, to help whiten it, during the 1870s.  This interesting pamphlet, written in 1850, details the scale of the problems.

Many cows had tuberculosis (also known as consumption), which was highly contagious and was passed into their milk, then consumed by humans to whom, the author supposes, the fatal disease was passed on.  So although drinking milk was associated with being healthy and the purity of the countryside, consumers found it difficult to trust what they were buying.  At Tettenhall in the West Midlands in 1862, a fight broke out between a milkman and a woodcutter.  As the milkman was driving his cart through the street, the woodcutter called out “There goes milk-and-water” and other similar opprobrious epithets.  The milkman, suitably enraged, got down from his cart to exchange words and then blows, but not having the woodcutter’s axe, came off the worst, his smock frock saturated with blood. Both survived to face each other in court, perhaps the tale of one unhappy consumer.

Large dairies around the outskirts of London were also set up, such as the Kilburn Dairy dating from the 1830s, to bring milk production closer to the capital although these too were dogged by  allegations about their purity. 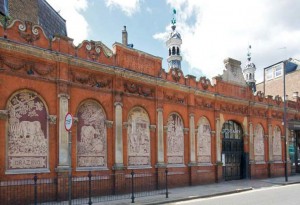 However, in Truro, Cornwall, in 1881, a letter writer to a newspaper expressed joy that the city was to have a ‘good and pure’ milk supply from the Tolgarrick Dairy, the milk cans brought in on a stylish cart by a man in ‘the whitest of smock frocks’ and a shiny hat.  Outside London, it was common for dairy men and cow men to wear smock frocks so it was a natural extension to continue to wear them when delivering milk.  A milkman in a white smock was noted in Reading in 1854, going off to milk his cows, when he was caught up in a chase to catch a robber.  For city dwelllers, concerned about purity of the product, the smock frock seemed to have added reassurance value for consumers, although this could also be used for advantage by unscrupulous dealers.

The smock frocked milkman seemed to have entered the common vocabulary though and in 1870, this was assured when the song ‘Polly Perkins of Paddington Green or the Broken Hearted Milkman’ was published, the front cover showing the love lorne swain in a smock frock.  The song remained popular for the next century, the smock frock not lasting quite so long. 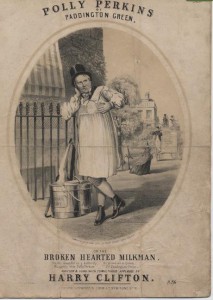