This last Monday was meant to be the most depressing day of the year, Blue Monday, although apparently this was a ruse invented about ten years ago by the travel industry in order to coax us all into booking summer holidays straight after Christmas.  A day which I think could do with more revival at this time of year is Plough Monday, traditionally the first Monday after Epiphany.  This rural custom is still celebrated in some areas of the East Midlands and East Anglia although originally it probably had a broader geographical spread.  It was said to be the first day that ploughmen went back to work after Christmas and was celebrated in various ways including ‘Molly’ dancing, similar to Morris dancing, mummer’s plays, parading straw bears and general dressing up, face colouring and transgression of the norms, depending on the customs of the area.  The ploughmen also asked for monetary contributions from landowners during a parade of the plough through local streets. Those who did not contribute risked having their front garden or doorstep ploughed up.  February was said to be the hardest month in the rural calendar: work was scarce, nothing new had yet grown, and winter vegetables and food from the previous year were running low.  Getting the ‘trembles’ was common – the colloquial term for starvation.  Such a parade and collection presumably helped the labourers through such lean times. 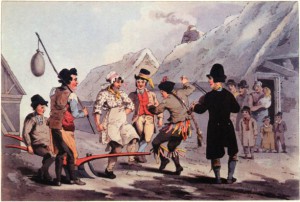 In 1886, the Sheffield Daily Telegraph reported on Plough Monday, a parade visiting Sheffield from ‘beyond Pitsmore’, Pitsmoor now a suburb of Sheffield.  A brass band started off the parade, then ‘a strong contingent – 12 men in top hats and smock-frocks with faces daubed a villainous hue, were yoked together by ropes to a plough, the stilts of which were in charge of a farm labourer, with seven-leagued boots and leathern leggings, adorned with wisps of straw’.  They were driven by another, who occasionally banged their backs with a bladder, in the manner of a whip.  This was also described and illustrated by George Walker in his 1814 book, The Costume of Yorkshire (see above). Reprinted a year earlier in 1885, this illustration was entitled the ‘Plough Stotts’, the Yorkshire term for the day, ‘the plough-driver with a blown bladder at the end of a stick by way of whip’.   In 1886, two others were dressed as women, ‘gorgeously got up’ and rattled the cash box ‘under the noses of spectators’, jumping onto trams to collect from passengers and trying to extort money from tradespeople, which according to the report they did quite successfully.  Bantering wittily with people they met, the procession of ‘Hodges’ seems to have made quite an impact and achieved the aim of raising money for those taking part. There was also another similar procession in the area, including a representation of Little Boy Blue with his horn, so it seems to have been not unusual for Yorkshire at this date.  Already there was nostalgia for the countryside for those living in cities and towns, and the representation that agricultural labourers brought forth into urban areas included the smock frock as essentially rural, playing to these notions and the idea that they were the guardians of long-held English customs.