Bare knuckle prize fighting was a huge sport in late Georgian England and patronised by the Prince Regent and elite society.  It was popular across classes and could make folk heroes of successful fighters.  Huge crowds were drawn to the brutal and violent fights, which often took place in the countryside, providing a spectacle for the local population, with the attendant circus that followed the fight including gambling.  Prize fighters were immortalized in cheap prints and books were written about the sport including Boxiana or Sketches of Ancient and Modern Pugilism by Pierce Egan published in the late 1820s, which detailed the career and fights of various boxers. 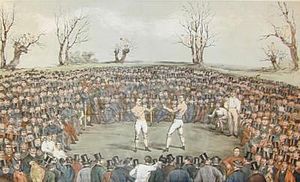 By the 1820s, the violence and spectacle attracted vast uncontrollable crowds and led to the clamp down on such matches by local magistrates, who prosecuted fighters for breaching the peace and encouraging gambling. It was no longer an aristocratic preserve but a free-for-all and opportunity for many to make money in any way possible. In May 1828, a match between Ned Neale and ‘Whiteheaded’ Bob was finally fought at Ascot Heath, near Windsor. Originally the fight had been planned to happen near Liphook, Hampshire, then at Bagshot, but the local magistrate or ‘beak’ in colloquial terminology, was Commissioner of the Peace for Surrey, Sussex and Hampshire and on their case, so a move to Berkshire was required. It was then a race against the clock to erect the stakes in a field to stage the fight, before the new local magistrate heard about it, the ‘panting crowd and foaming horses’ following closely, in their traverse across the southern counties.

Ned Neale was described as entering the ring in a smock frock and in the ‘finest condition’ and was the bookies favourite for the fight. After fighting sixty-six rounds which had lasted an hour and two minutes, the presence of a magistrate was announced. However, the magistrate couldn’t get through the crowd to stop the fight and it continued until the eightieth round and for another thirteen minutes, before the magistrate finally succeeded in halting the fight. Both fighters withdrew, neither side winning the £250 prize money.

Although the tone of the writing in the newspapers slightly frowned upon such sport, both the violence and, in particular, the type of crowd it attracted; pickpockets, coves, a motley throng, ‘the ladies’, the ‘great unpaid’, the fights obviously needed to be recorded in detail to satisfy their broad readership and perhaps a need for such salacious details across all classes.

In July 1827, a fight took place at Ruscombe Lake, near Twyford in Berkshire, between Jem Burn and Edward Baldwin, alias ‘Whiteheaded’ Bob, once more, who this time entered the ring wearing a white smock frock which was then taken off to fight. The seventy-six rounds fought were described in detail by the newspapers, Burn the probable victor although it was decided that a re-match should probably take place once the men had recovered, Bob’s face described as ‘actually hideous’, after the fight.

In 1820, at Mousley Hurst, a well-known fighting spot, Shelton and Cooper fought for 100 guineas, Cooper entering the ring wearing a smock frock.

It was still an immensely popular spectacle for working people although it was becoming increasingly difficult to outwit the magistracy. Why then did these prize fighters, folk heroes and the epitome of masculinity, enter the ring often in a long white embroidered smock frock? By wearing the dress of the majority of the crowd did it suggest solidarity with them – the idea that this supreme fighter was just like anyone else really? Did the whiteness add a degree of virtue perhaps, looking like a priest’s white surplice, and maybe suggest righteousness or perhaps divine intervention? Was it just a useful disguise to blend in with the crowd, especially if being chased by a magistrate?

I am not sure but it is interesting that such an example of violent masculinity, the prize fighter, men deified by the crowd and their followers, should choose the embroidered smock frock to parade their bravado before a fight. Presumably, the smock engendered the respect and status necessary to be a successful prize fighter, or maybe the fight itself was enough to show off their masculinity and strength. It is another example of nineteenth century clothing throwing a light on gender issues not being exactly how we imagined them. It is not the image of masculinity that we relate to today, particularly in the world of boxing where although showmanship still forms a large part of the experience, there seems to be a very different type of machismo present.