As we start to clear up after Christmas, perhaps we should think about how easy most domestic chores are today in comparison to the nineteenth century.

Laundry was one of the big domestic tasks for the Victorian household, vital for health and cleanliness, but back-breaking work for women. Wash day was traditionally Monday although completion of the laundry, the drying and ironing, was finished afterwards. It was an essential job for women, the urgency dictated by the number of garments a person had, and taking in the laundry of others to do too was often a way to make casual money on the side to augment household incomes. There were also professional laundresses alongside household ones, female run businesses, still an under-researched area of social history. During the nineteenth century, there were various attempts at making a washing machine, although they did not become commonplace for the majority until well into the twentieth century.

One such attempt was reported in the Exeter Flying Post in 1858. ‘Startling’ the laundresses of the city was Hancock’s Washing Machine, made in London.  The contraption was described as being of a simple construction and was exhibited for all to see. A boy of ten or twelve years old was able to work it with ease. In the demonstration, four bed sheets were washed ‘thoroughly’ clean in five minutes, appropriately on a Monday, and a number of smock frocks cleaned in about the same time. Both articles chosen for the demonstration were known for their whiteness and so able to prove the efficiency of the washing. The newspaper commented, that if the machine became popular, ‘the washer woman’s occupation will be clean gone’ – a nice pun! A ‘materfamilias’ watching remarked “What, for gracious sake, will ‘em think of next?” A machine may have got rid of back-breaking work but it also meant the loss of livelihoods. 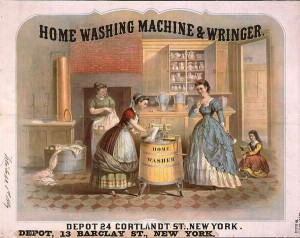 As a standard working man’s overall, the smock frock would have formed a large part of the laundry. Heavy and bulky when dry, they would have been even weightier when wet. As they were predominantly white, they were also a good test of a laundress’s skill and a reflection of a household’s cleanliness. The advent of a machine that would wash several smocks at once was probably welcomed by the washer woman in terms of a reduction in physical labour, although such household appliances did not become commonplace for another century, long after the smock frock had disappeared from general usage.