Smocks, by the very nature of their construction, are decorated garments.  If unpicked, the smock would consist of rectangles of fabric both for the sleeves and the body.  Manipulating the fabric, gathering it up to form some kind of shaping, at the cuffs and across the chest, was brought about by smocking.  This gave it ornamentation with a sort of honeycomb pattern and texture, along with a degree of elasticity.  The garment was then decorated further with embroidery.

There are, of course, differences in the quality and design of embroidery work on smock frocks: some were workaday and relatively simple and probably ready-made; others were for Sunday best or for a particular occasion and would be finely worked either by female relations or professional needlewomen.   All had some kind of embroidery though, even if somewhat plain.  It may seem strange to us today, that working men’s dress should be so ornate.  Embroidery was a skill taught to girls, particularly over the course of the eighteenth and nineteenth centuries, and was a way for women either to embellish pieces for male family members as a sign of love and affection, or to earn a living.  If done domestically, it could also be a method of personalising garments.  Although the smock has often been put into the category of folk embroidery and compared to embroidered folk dress in continental Europe, men’s dress was often embellished with embroidery from the Medieval period onwards, certainly in the mainly elite examples which now survive in museum collections.  For instance, the embroidered waistcoat had a long tradition in the eighteenth and early nineteenth centuries, so in this context, the wearing of embroidery by men was not unfamiliar.

Writers about smocks have often tried to explain the symbolism of the patterns that appear on the garments, for example, suggesting that certain symbols were linked to particular trades and so could identify the profession of the wearer.  Although this may be true in some cases, generally the same patterns appear in smocks regardless of a particular individual’s circumstances, some probably passed around a family or community.  Lack of evidence about where smocks have come from and who wore them in many surviving examples, also makes this a difficult theory to pursue.  Where smocks were produced in large numbers, the pattern was drawn on and then worked, so smocks from one area may have similar patterns.  In Newark, a town associated with smock making, metal pattern blocks printed the design onto the fabric which was then given to out-workers to embroider. 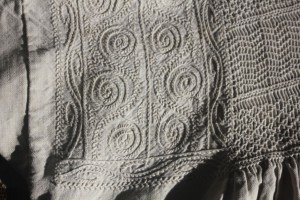 Interlaced and repetitive geometric patterns seem to have been most popular using roundels, spirals, zig-zags and diamonds, in usually no more than three different stitches, often including feather stitch or chain stitch.  Naturalistic motifs, such as flowers and leaves, found their way into more ornate examples, along with designs such as hearts and crooks.  These were all worked in the ‘box’, the panels either side of the smocked area.  Thus the embroidery added to the surface texture and the smock’s character.  It was normally done in the same coloured thread as the base fabric, although there are a few examples with contrasting thread colours.  The embroidery played a practical role too, adding more padding to areas where protection was needed from wear. 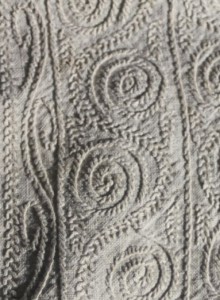 The embellishment of the smock frock with embroidery gives the garment, what we now consider, its essential character.  The care and time needed for this stitching on what was principally work wear or a working overall, indicates how important the smock was for both its makers and wearers.