The Royal Agricultural Society, established in 1838 and granted a Royal charter in 1840, put on shows which quickly became an important part of the farming calendar, with events across the country.  The aim of the Society was to use science to help agriculture and so improve productivity to meet the needs of the growing population.  In 1854, their show was held in Lincoln and was deemed to be a great success with 23,000 admissions on the second day, the city illuminated and the old gateway lit with coloured lamps in the evenings.  The newspaper correspondent noted the interest shown by people in everything from implements to animals.  However, he also remarked on the dress of the Lincolnshire labourers, inspecting machines designed to save them work, in their ‘blue smock-frocks curiously embroidered with the needle which they delight to wear. Could the Royal Agricultural Society not do something in the way of suggesting a better and more convenient dress for the labourer than this extraordinary garment! They have greatly improved the other denizens of the farmyard, and might now with advantage take steps by which to avoid the reproach of doing everything for the cattle and nothing for the human beings who tend them’.

In other words, the smock frock was part of the problem – not modern and scientific, but was still popular and no official alternative had yet been put forward to encourage its disuse.  Blue smocks were common in many areas, along with green and brown.  The town of Newark in Nottinghamshire was a centre of ready-made smock manufacture and associated with those of a blue colour in particular.  As this was probably the closest large centre of smock manufacture to Lincolnshire, it is perhaps not surprising that blue smocks were common in the county.  Lincolnshire Museums hold one of this colour, from the 1840s, and worn near Sleaford. 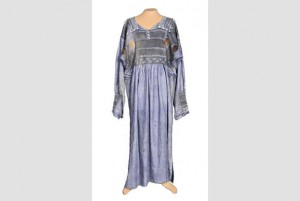 The capaciousness of the garment is obvious and this made them dangerous as farming began to embrace steam power and the machine age, as promoted by the Royal Agricultural Society.  Apt to get caught in spokes and spindles and pull the wearer in behind, the smock’s days were starting to be numbered.