Smock frocks frequently ended up in court, sometimes on the back of those standing trial and sometimes as stolen items.  The stories that the newspapers tell of these trials show how hard life could be for labourers in the nineteenth century.  The fact that a few court reports read in a humorous vein belies the essential truth that it was thought, by some, to be better ‘transported’ away from England, friends and family, than toiling further at home.  Such a case was reported by the Worcester Journal in 1844.  Henry Ladbury, a 35 year old labourer, was charged with stealing, including two smock frocks from other labourers and a scythe.  Two out of three charges of theft were ‘clearly’ proved and he was sentenced to two lots of transportation for seven years each, the standard punishment for a felony if a repeat offender.  Ladbury, presumably trying to remain upbeat, addressed the witness box when given his sentence saying, ‘Never mind, my lads, I shall want no scythes there, – no mowing in that there country’ – Poldark he was not!

The Reading Mercury reported in 1865 the case of Henry Aldridge, a bird catcher, who stole a smock frock from another bird catcher.  In magistrate’s court, he asked if he could emigrate to New Zealand with a new suit of clothes from the parish, instead of serving a sentence in prison. Seemingly, life on the other side of the world, even with nothing, might be better than his current existence.

Clearly, for those living life on the edge of survival, perilously close to the margins, being caught committing a crime could also offer some respite, much to the chagrin of the authorities for whom crime prevention, much as it still does today, remained a perennial topic and vote decider for politicians. In 1867, Mary Ryan stole a smock frock and then tried to sell it to a second-hand clothes dealer for 6d, presumably to raise much needed cash.  The smock frock was traced, although Ryan said she obtained it legitimately from a cowman.  When sentenced to gaol for twenty-one days, she apparently remarked, ‘A very nice rest’.  If she had been scrapping around to raise six pence, maybe a stay in gaol where shelter and some basic food was a given, was a ‘nice rest’.  The authorities were clearly not keen that gaol should be seen as better than normal life, an argument that still rages today, but it does show the desperation of what life on the margins might be like.

This is backed up by another Worcestershire case from February 1838.  Thomas Tudnall was an itinerant worker, tramping the country looking for work, wearing a smock frock.  He also seemed to be a regular attendant in court, his conversation with the magistrate reported in the Worcestershire Chronicle:

Magistrate: Well John, how many gaols have you been in since you paid us a visit last year?

John: Not many, your worship, only Warwick, and Nottingham, and a few others, where they put me whilst I was looking for work.

John: Any place will do until the weather gets warmer.

Tudnall was given a shilling to send him on his way, out of the city and to look for work.  Being convicted of being a rogue and a vagabond, essentially for being homeless and not finding work and so having to beg, would seem to be his only convicted crime.  A parish would be anxious to remove such a person from the locality to the nearest gaol, before the parish became liable for looking after them for the long-term.

The smock frock was an integral part of working life, worn, stolen, used to raise money, often without a second thought, and offers a small window into these working-class and poverty stricken nineteenth century lives. 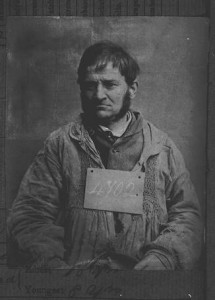 Prisoner wearing a ragged smock frock from a collection of photographs of prisoners from Buckinghamshire – see:  http://www.buckscc.gov.uk/leisure-and-culture/centre-for-buckinghamshire-studies/online-resources/victorian-prisoners/